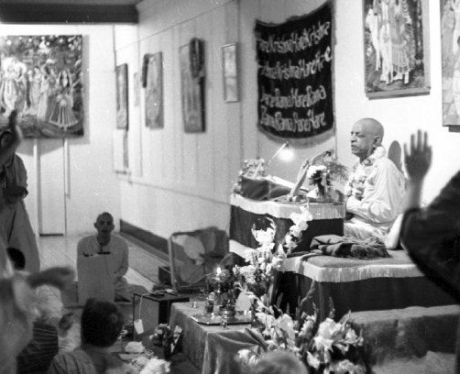 Hare Krisna to everybody! Please, accept my obeisances. All glories to Srila Prabhupada! Jaya Sri Guru and Sri Gauranga!
The following interesting letter by Srila Prabhupada I have found on the page of Jagadananda prabhu in a group in Viber.
“You say the farm is only five miles from the city, so we will build our temple on that land. The farmers should be trained up to become devotees of Krishna. The same Idea I have already given for Hyderabad farm. Invite the local farmers to participate in Kirtan and prasadam distribution, engage them to work the land. They may keep whatever they require for their maintainance and the excess production may be traded or sold. But we are not going to develop a competitive farming enterprise for making money. The basic principle is to become independent of artificial city life, working in factories producing nut and bolts. Gandhi had this Idea, the one defect was that there was no Krishna in the center. So the same idea of village organization, but keeping Krishna in the center should be introduced on our farm projects.” (Srila Prabhupada to Yasomatinandanan Prabhu, October 14th, 1976)
Best regards,
Navadwipa Chandra das.
Поделиться